The most common reaction I hear when I tell people about mob programming (or even paired programing) is “How can that possibly be efficient?”, sometimes phrased as “How can you justify that to management?” or “How productive are you?”

I think that efficiency in terms of “How much stuff can we get done in a week” is the wrong thing to be focussing on in teams. It can often be helpful to be less efficient. 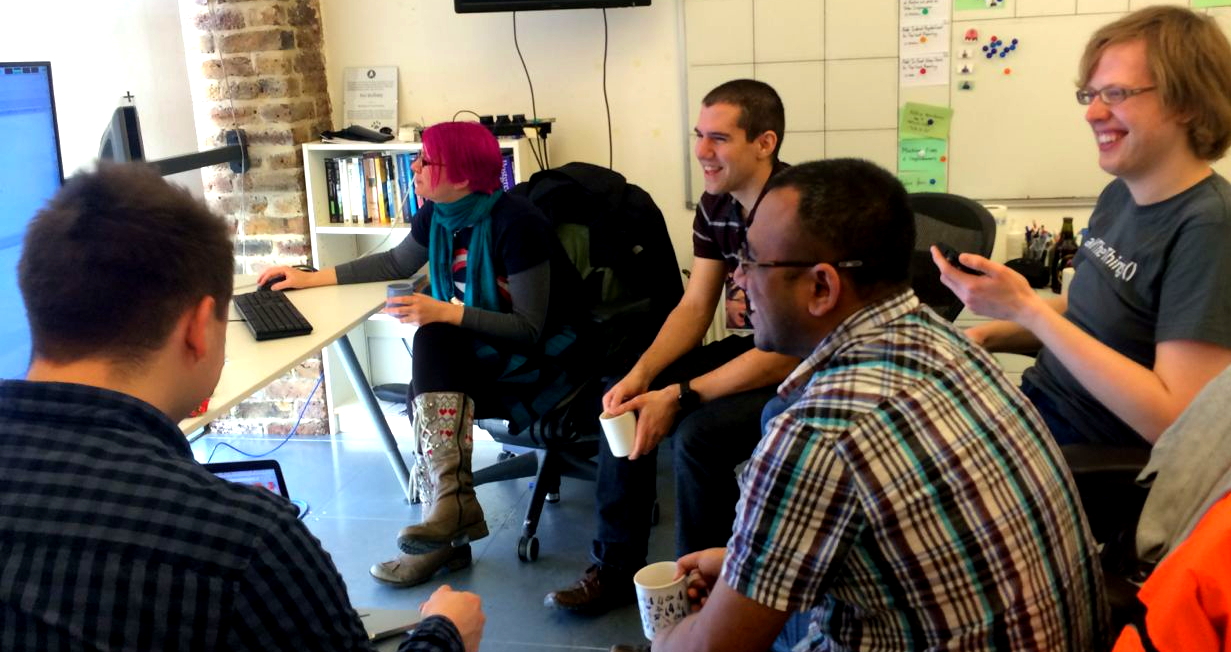 At Unruly we’ve been Mob Programming regularly over the last year.

At first glance it’s hard to see why it could be worth working this way. Five or more people working on a single task seems inefficient compared to working on five tasks simultaneously. As developers we’re used to thinking about parallelising work so that we can scale out.

If your team builds twice as much stuff as another team, are you more effective?

What if all the features you build are worth less than a single feature the other team has built?

It’s often not evident up front which of these will be more valuable. However, if we can order our development to start with testing hypotheses about features A and B we often learn that one is much less valuable than we thought, for some reason it won’t work for us — meanwhile, new opportunities often open up that makes the other option much more interesting.

When working alone it’s very easy to get sidetracked into working on things you notice along the way that are important but unrelated to the current goal of the team. When working together there are more people to hold one another accountable and bring the focus of the team back to the primary goal, avoiding time consuming diversions.

When working together we also help hold each other accountable for following working agreements like fixing non-deterministic tests immediately, or refactoring a piece of code the next time we’re in the area.

If you’re going to build it, build it right

It’s easy to plan a feature, implement what you planned to do, and have it technically working, but generating no value. Here is a case where “technically correct” is not the best kind of correct. If we release a feature and it’s not being used, or not making any money, we need to learn, iterate and improve. This may involve ordering the development to prioritise trying things out early, even if we’re not entirely happy with the finished product.

It’s often more interesting how quickly we can achieve a team goal, than how much our team can get done in a set time period. In programmer parlance Low latency is more valuable than high throughput.

Therefore it can be worth trading off “efficiency” if it means you get to your goal slightly quicker.

In Extreme Programming circles there’s a concept of ideal time — if everything went exactly according to plan, and you had no interruptions, how long would a task take.

Working together as team in a mob is the closest I’ve experienced to real “Ideal Days”.

This tends to lead to individual or pair developer days being less than ideal. Rather, you get a few periods of productivity interspersed with interruptions where you lose your “flow” and train of thought.

This is quite different with a mob of a few people. If you need to go off to a meeting, you go off to your meeting. The mob keeps on rolling.

If someone comes over with a question, someone peels off the mob to help them. The mob keeps on rolling.

You encounter a puzzling problem, no-one has any idea how to approach it, someone peels off to go and spike a couple of approaches. The mob keeps on rolling.

You’re feeling like a break, you can just take one whenever you like. The mob keeps on rolling. In this regard mob programming is actually less tiring than pair programming. There’s no amount of guilt from losing concentration or taking a break. You know the team will continue.

So while a mob requires more people, it lets us achieve a specific goal more quickly than if we were working on individual tasks.

It’s also worth bearing in mind that the value of your team practices can’t be measured purely by the amount of stuff you deliver, or even in the amount of money generated by the features you build.

If your work is investing in the team’s ability to support the software in production in the future, or in their ability to move and learn faster in the future, then that’s adding value, albeit sometimes hard to measure.

Mob-programming and pair-programming are techniques that can help teams be more effective. They may or may not affect productivity, but it doesn’t matter.